Taking on the World After Cancer Surgery

Already a leader in minimally invasive surgery for gynecologic cancers, Kaiser Permanente Northern California has enhanced its care with the addition of robotic technology. Above, Jeanne Osterland hikes in Hood Mountain Regional Park just weeks after her robotic-assisted hysterectomy. 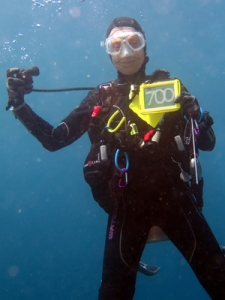 That was Jeanne Osterland’s reaction when she learned she had endometrial cancer in 2015. A fit 69-year-old, she had plans to travel to Australia with her husband the next month, followed by a scuba diving trip with friends.

“Based on everything I’d heard about endometrial cancer, I knew that I’d be having a hysterectomy,” she said. “I pictured a big incision and a long, painful recovery.”

That scenario was far from the truth. Osterland had her uterus, fallopian tubes, and ovaries removed at Kaiser Permanente San Francisco on Aug. 11. After a biopsy revealed more extensive cancer, she had lymph node dissection on Aug. 25. Both procedures were performed using robotic-assisted minimally invasive surgery, done through several small incisions. Osterland was back on her feet in no time and flew to Australia on Sept. 9 as planned.

A Sea Change in Cancer Care

“In the past, women with endometrial cancer had traditional open surgery,” she explained. “They would have a big vertical incision and would need to stay in the hospital for at least a week. Since many women who get endometrial cancer are obese and diabetic — conditions that increase your risk of surgery complications — they’d have a very high chance of getting a wound infection.”

Once at home, patients were typically bedbound for a week or more because of incision pain. That increased their risk of developing blood clots, which can travel to the lungs and cause a fatal pulmonary embolism.

By contrast, most women who have MIS go home the same or next day. “They’re back to regular food and activity within a few days, and their chance of getting an infection is extremely low,” said Dr. Suh-Burgmann.

“We treat more than 1,200 women for endometrial cancer each year, and some 98 percent are having MIS,” she added. “It’s mind-boggling to think about the number of hospital days we’ve saved and the amount of pain and suffering our patients have avoided.”

A Leader in Gynecologic Oncology

Robotic-assisted MIS allows for increased precision in complex cases, such as when a woman has scar tissue or distorted anatomy caused by previous surgeries or cancers.

“It gives the surgeon a three-dimensional view inside the patient with far better magnification and lighting,” said Bethan Powell, MD, who operated on Osterland and serves as clinical lead for the region’s Robotic Program in Gynecologic Oncology.

Because the robotic instruments have 360-degree range of motion, they also provide increased dexterity. “They become like an extension of your hands, and that makes it easier to do things like suturing and complicated dissections,” said Dr. Powell.The region began offering robotic-assisted surgery in 2009, and now offers the technology at four medical centers: Walnut Creek, Santa Clara, South Sacramento, and San Francisco (with Oakland cases taking place in San Francisco). In 2015 alone, nearly 500 robotic-assisted hysterectomies were performed.

“Kaiser Permanente Northern California is already one of the largest Gynecologic Oncology practices in the U.S., with 15 fellowship-trained specialists,” said Dr. Suh-Burgmann. “The availability of robotic technology at these strategic hubs allows us to offer top-notch care to women whose cancers require more complex surgeries.”

Six weeks after her second surgery, Osterland headed to the Philippines for a week of scuba diving.

“I feel very fortunate I had access to robotic surgery,” she said. “I was celebrating my 700th dive, and I didn’t want to miss it.”

Log in here to watch a video of a robotic-assisted hysterectomy.

This article appeared on Look Inside KP on February 8, 2016.