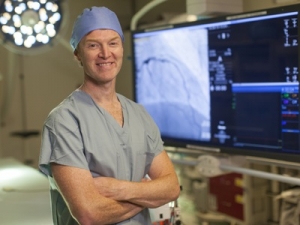 Gary Leitz is a former U.S. Senior Amateur Golf champion who is not used to giving up. But for a time back in 2014, when he was experiencing a serious heart condition, he said he felt resigned to a situation he simply described as “not good.”

“I accepted the fact that my time might be shorter than I had expected,” he said.

More than a decade ago, the 84-year-old Kaiser Permanente member had coronary artery bypass surgery to alleviate a number of blockages. But as is sometimes the case, over time, the bypasses became clogged, and Leitz began having severe chest pain several times a week. It was so bad that he was reluctant to go out on the golf course.

Leitz’s Kaiser Permanente cardiologist in Fresno, Amir Sanati, MD, did diagnostic testing and the results were not encouraging. Not only were Leitz’s bypasses clogged, but there was also a 90 percent blockage in the left main artery, the most important of the coronary arteries.

Because of a number of factors including his age and medical history, Leitz was not a candidate for another bypass surgery, and the only remaining option was a high-risk cardiac stent procedure. In the fall of 2014, Dr. Sanati arranged for Leitz to be treated at the Kaiser Permanente Medical Center in San Francisco, which is staffed by highly experienced specialists who handle the most difficult cardiac cases.

“I’m a busy interventional cardiologist and I’ve been working in the field since 1999,” Dr. Sanati explained, “but every year I get 5 to 10 very complex cases that cardiologists outside of Kaiser Permanente might refer to Stanford or UCSF because they require advanced tools and expertise. Fortunately, we have the expertise within our organization, so our patients are able to get top-quality care and service.”

Northern California patients who need complex cardiac services including heart surgery, treatment of heart rhythm issues, and high-risk angioplasty and stenting procedures — such as the one that Gary Leitz needed — benefit from the fact that these services are consolidated at Kaiser Permanente medical centers in San Francisco, Santa Clara, and Sacramento. This enables the centers to do high volumes of the most difficult cases and, according to Kaiser Permanente Northern California Cardiac Services Director Julie Rowell — that leads to top quality.

“We hire highly skilled physicians who were trained at the nation’s top academic institutions, and they are leaders in their fields,” she said. “When we look at data from the most accurate source for cardiac outcomes in the US cardiology community, our cardiac catheterization lab in San Francisco is a top performer nationally in terms of volume and quality — recently ranking in the best 10 percent of programs.”

In the U.S. News & World Report’s annual “Best Hospitals” 2016 report, Kaiser Permanente San Francisco Medical Center was, for the second year in a row, named among the Top 50 in the nation for the specialty of “cardiac care and heart surgery.”

After Dr. McNulty inserted a three-millimeter-wide catheter into Leitz’s left main artery, he passed a tiny rotating diamond-studded burr through the catheter and used it to grind away the plaque to clear the blockage. He then used ultrasound to guide placement of a series of drug-coated stents to keep the artery clear.

“We have absolute state-of-the-art equipment here to accomplish some pretty incredible things,” Dr. McNulty said. “This was a complicated case, but we do several hundred of these high-risk procedures a year.”

The procedure took about an hour and a half, and Leitz was sitting up in bed later that afternoon, pain-free. He described the difference as “like night and day.”

After the procedure, Leitz was back to playing 18 holes of golf three times a week, and appreciating his return to an active life. He credits Dr. Sanati for getting him the advanced care he needed, and he said he’s grateful to Dr. McNulty for his expertise.

“I owe Kaiser a lot,” he said. “I have trusted them with my life, and they’ve really come through for me.”

Kaiser Permanente San Francisco Medical Center was, for the second year in a row, named among the Top 50 in the nation for the specialty of “cardiac care and heart surgery.” Read more.