Kaiser Permanente analysis of nearly a million patients explores contribution of major risk factors in ethnically diverse population. A broad look at an ethnically diverse sample of nearly 1 million Kaiser Permanente patients compared the individual contributions of major risk factors for heart attacks and stroke and found physical inactivity a greater risk than expected, according to a study published Feb. 10 in the European Journal of Preventive Cardiology.

“It is now 2020 and heart disease remains the number 1 killer and stroke the number 5 killer in the United States,” said lead author Jamal S. Rana, MD, PhD, chief of cardiology at Kaiser Permanente Oakland Medical Center and adjunct researcher at the Kaiser Permanente Division of Research. “The discussion with our patients about the relative contributions of these important measures of health remains as urgent as ever. The startling finding was that lack of physical activity carries 65% excess risk, similar to that of smoking or poor cholesterol levels.” 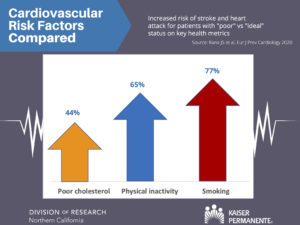 The analysis used data on 991,698 Kaiser Permanente Northern California adult patients with no prior known history of heart disease or stroke. The investigators examined the patients’ blood pressure, smoking, physical activity, body mass index, total cholesterol, and blood glucose. Diet was the only factor of the AHA’s Simple 7 not examined because researchers lack a simple way to reliably record patients’ dietary habits.

The study is unique in its large size and diversity; about one-fifth of the patients studied were Asian (211,144 members), about one-sixth Hispanic (159,873 members), and about 7% black (67,049 members). “It speaks to the strength of our integrated health care system that we were able to harness data from physical activity to laboratory blood tests to explore comparative risk at such a large scale in an ethnically diverse population,” Dr. Rana said.

The excess health risk associated with physical inactivity ranged across ethnicities from 43% to 73% for combined heart disease and stroke. A recent Centers for Disease Control and Prevention estimate found that the percentage of Americans who are physically inactive ranges from 17% to 48%, depending on the state or territory where they live.

“Improving physical activity needs to have the same public health approach as successful past interventions for smoking cessation and expanding use of cholesterol-lowering therapy.” said senior author Stephen Sidney, MD, MPH, director of research clinics for the Division of Research.

This story originally appeared in Inside KP