Bonding No Matter the Distance

It was difficult for Kiesha Shelton to put into words how she felt when her premature daughter was rushed to the Neonatal Intensive Care Unit.

“Traumatizing,” was one of the first things that came to mind.

“Not being able to hold and engage with my daughter was devastating,” added Shelton, a Vallejo resident.

Shelton’s daughter, Amira, was born at 26 weeks and weighed 1.4 pounds. She spent 3 months in the NICU at the Kaiser Permanente Walnut Creek Medical Center, but thanks to the NIC-Unite program created by neonatologist Vishnu-Priya Akula, MD, Shelton was able to see her daughter every day.

NIC-Unite uses Microsoft Teams technology and Apple iPads to virtually unite parents from remote locations with their newborns. According to a survey by Dr. Akula, the program has been shown to greatly reduce stress in parents and helps foster vital bonding.

Many parents with babies in the NICU can’t visit at times due to work schedules or living far from the hospital. That can create anxiety, sleep deprivation, and depression, according to Dr. Akula’s survey. The NIC-Unite program was created to help address these issues.

“It really alleviated my stress,” Shelton said. “Amira’s big sisters also got to see her all the time, which was a pretty awesome experience.” 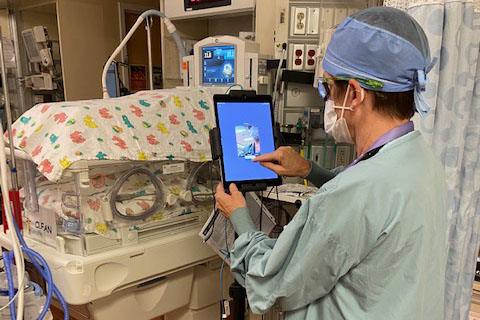 Piloted at the Kaiser Permanente Walnut Creek NICU in August 2019, the program today has facilitated over 200 visits and operates in multiple Kaiser Permanente facilities in Northern California. When a baby is admitted to the NICU, parents receive instructions on how to work the technology and schedule appointments from home. Then a registered nurse simply rolls a flexible stand with an attached iPad near the infant and begins the 15-minute session once a day.

Dr. Akula’s survey of 22 parents before and after using the program yielded promising results. Prior to use, more than 70% of parents reported feeling sad, nearly 40% had difficulty sleeping, and 40% said they had anxiety. After using NIC-Unite, 20% felt said they felt sad, less than 10% had trouble sleeping, and 10% suffered anxiety. The program has also been shown to help breast milk production if the mother pumps while watching her infant, according to Dr. Akula.
“Parents can relax seeing that their baby is OK,” Dr. Akula said. “It frees them up to focus on other things like children at home and work.

The program was inspired by an idea Dr. Akula got while having lunch with a friend who was incessantly looking at her phone to check on her dog being recorded at home.

In collaboration with Hayley Hanes, a technology consultant for The Permanente Medical Group, Dr. Akula started testing iterations until the pair found one that harmonized with the nurses’ workflow. It took about 6 months to get up and running and to train more than 90 nurses.

“Watching the parents’ faces when they see their baby is amazing,” said Colleen Jones, RN, a nurse at Kaiser Permanente Walnut Creek. “The program makes the experience better for everyone, including nurses and doctors.”

Dr. Akula, who hopes the program will be implemented nationwide at Kaiser Permanente, is also working to make these virtual visits available to parents immediately after their baby is transported to a NICU.

“Dreams do come true,” she said. “It took some time, but it’s been very rewarding.”

This story originally appeared in InsideKP