“What we found striking in this study was that the incidence of stroke began to increase rapidly starting at around age 40 for Black adults,” said the study’s co-author Jamal S. Rana, MD, PhD, an adjunct investigator with the Kaiser Permanente Division of Research and a cardiologist with The Permanente Medical Group. “It is well known that Black adults have higher rates of hypertension in general, but the fact that their blood pressure levels are starting to increase at such an early stage in life is concerning. It also means we need to start talking about primordial prevention of stroke.”

The research, published March 29 in Hypertension, used data collected in the Coronary Artery Risk Development in Young Adults (CARDIA) study. Launched in 1985, CARDIA enrolled 5,115 Black and white women and men ages 18 to 30 at research hospitals in 4 cities: Kaiser Permanente in Oakland, California; the University of Alabama, Birmingham; Northwestern University in Chicago; and the University of Minnesota, Minneapolis. Blood pressure measurements and other tests were performed when participants entered the study and were conducted every 5 years, with 2 additional exams at years 2 and 7. 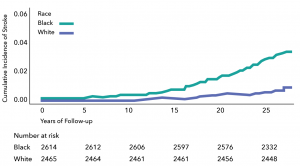 For this study, the researchers used data collected on 5,079 participants starting at the 5-year follow-up exam (1990-1991) — when the average age was 30 — through 2018. At the 5-year exam, the Black participants already had higher rates of elevated blood pressure and stage 1 and stage 2 hypertension.

By 2018, 100 people in the study had had a stroke, at a median age of 49.8. The stroke incidence rate was 29 per 100,00 person-years for white adults compared with 120 per 100,000 person-years for Black adults — a rate nearly 4 times higher. A person-year is a measurement that takes into account the number of people in the study and the amount of time each person spends in the study. The analysis also took into account other risk factors for stroke, such as smoking, diabetes, high cholesterol, obesity, lack of physical activity, and excessive alcohol use.

High blood pressure damages and narrows arteries throughout the body. In addition to increasing the risk of having or dying from a stroke, high blood pressure increases risk for heart attack, heart failure, cognitive impairment, vascular dementia, and kidney failure.

Yariv Gerber, PhD, a professor of epidemiology and head of the School of Public Health at Tel Aviv University in Israel, conducted the research while on a sabbatical at the Division of Research. “We demonstrated that the association of high blood pressure with stroke varies with age, strengthening from young adulthood to midlife,” said Gerber. “The association was also dynamic, with the most recent measurement most strongly associated with subsequent stroke risk. This stresses the need for early public health interventions to maintain optimal blood pressure levels in young adulthood, particularly in high-risk Black young adults.”

Previous research suggests young adults age 18 to 39 in the United States are less aware than adults age 40 and older about what their blood pressure numbers mean and why it is important to keep blood pressure low. “Anytime you talk about abnormal blood pressure, the biggest challenge is always that people are not feeling it in real time,” said Rana. “It is not until a person’s blood pressure is really high that they feel any symptoms. Our goal should be to have people proactively think about blood pressure control. We can’t emphasize enough the need for awareness about this, especially given potential serious consequences.”[/caption]

Adds Dr. Sidney, “Our study brings up the importance of providing education early in life about the myriad ways high blood pressure affects our health and the importance of maintaining the healthy habits specified in the American Heart Association’s Life’s Simple 7. Developing these habits, which include eating a healthy diet, taking part in regular physical activity, not smoking, and maintaining a normal weight, early in life, can help keep young adults from developing hypertension, and prevent them from having a stroke.”

The study was supported by the National Heart, Lung, and Blood Institute.

This story originally appeared in Division of Research Spotlight.