He was 100 feet from the half-marathon finish line of the Napa Valley Marathon last year when suddenly everything went black. Kaiser Permanente member Mark Gong’s heart had stopped just minutes from finishing the 13-mile run.

“I was passed out when these angels jumped right up and saved me,” said Gong, 60, a father of 2 who lives in San Jose. “I was shot back to life within minutes. If it had been any longer, very permanent damage could have been done.”

Dr. Kim was a spectator at the marathon that year and Dr. Chiu was a runner, having volunteered at previous marathons as a medical aide through Kaiser Permanente, which has sponsored and provided volunteer medical professionals for the race for many years.

“I used to be a very go-go-go person, and now I live in the present. I spend more time with my family and giving back to the community because that is more important than anything else.”

Both physicians were chatting with friends and family on the sidelines, Dr. Chiu having just finished the race, when the commotion began.

“I saw a man go down and everyone just stood there for a second. I remember thinking, why hasn’t he gotten up,” Dr. Kim said.

Their instincts immediately kicked in. Both rushed to the scene, Dr. Chiu having hopped a fence to get there. Within seconds Dr. Kim began performing CPR on Gong, whose face was covered in blood from a cut during his fall.

The Kaiser Permanente medical team on duty was alerted and quickly administered an automated external defibrillator, jolting Gong back to life.

“Amy administering CPR was absolutely critical,” Dr. Chiu said, adding that if not for the CPR, Gong could have suffered brain damage or other serious repercussions. “Seeing the preparedness and skill of the medical team was a point of pride for me as an employee. Every person there helped save his life.”

From the finish line, Gong was rushed to the local hospital, then transferred days later to Kaiser Permanente Santa Clara. As an avid runner — the Napa Valley Marathon was his sixth marathon — and otherwise healthy man, Gong was shocked to learn that one of his main arteries had a 70% blockage.

“The doctor said my heart could have stopped at any time,” said Gong, a retired software engineer. “I usually run by myself in the woods and if it had happened then, I wouldn’t be here today.”

Soon after his heart attack, Gong’s coronary artery bypass surgery was performed at Kaiser Permanente Santa Clara. Within a week he was walking and driving again, a very rapid recovery. It was the support of his family and students at his Taekwondo school that he started 5 years ago that motivated him to keep going. 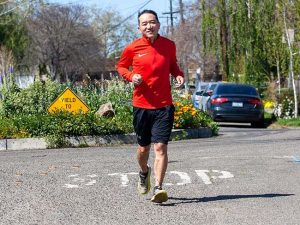 Today, Gong is in “the best shape of my life” and feels better than ever after adopting a healthy lifestyle, which he said was inspired by the health education courses he attended through Kaiser Permanente. He started running again 3 months after his surgery.

Almost exactly a year after his near-death experience, Gong said he has decided to run in the half-marathon in the 2022 Napa Valley Marathon to commemorate the life-changing event.

“Every day I wake up and say, ‘thank you,’’’ he said. “I used to be a very go-go-go person, and now I live in the present. I spend more time with my family and giving back to the community because that is more important than anything else.”

To Dr. Kim and Dr. Chiu, Gong simply said, “I owe them everything. They saved my life.”

This story originally appeared in MyKP.kp.org