An abdominal aortic aneurysm is often referred to as “a ticking time bomb.” That’s because if an aneurysm bursts the aorta — the largest artery in the body — it is likely to result in a deadly torrent of internal bleeding. 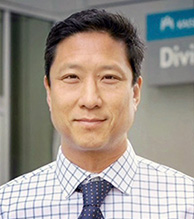 Doctors typically don’t recommend patients have surgery to remove an aneurysm until it has gotten to the size it might rupture. But how likely is that? Robert Chang, MD, a vascular surgeon at The Permanente Medical Group and a physician researcher at the Kaiser Permanente Northern California Division of Research, recently published the largest-ever study to answer that question. What he found is already changing how patients are treated.

Why did you decide to do this study?

Chang: Abdominal aortic aneurysms are a leading cause of death in this country, due to rupture. But the information we’ve been using to decide when to consider surgery has been based on information from studies that are quite old.

Why could you do this research at KP Northern California?

Chang: We have an electronic registry of 15,000 patients with abdominal aortic aneurysms that we use to monitor our patients.
But it had never been used for research purposes. We developed a natural language processing tool that was able to examine the medical records. We taught it to find which imaging studies in the medical records showed an abdominal aortic aneurysm. Then we taught it to tell us the size of the aneurysm when it was first diagnosed and how much it grew over time. It would have taken us years to look through all those records. The software could do it in just a few hours.

What did you look at?

Chang: We looked to see if there were patients who had large aneurysms that for whatever reason were not fixed right away. And then we looked to see what happened after the aneurysm reached the size threshold — 5.5 cm (2.2 in) for men and 5 cm (2 in) for women — where we would talk to a patient about surgery. What we found was that, essentially, the incidence of rupture is lower than we thought across the board for every starting size.

Is this good news for patients?

Chang: It’s realistic, more accurate news. We thought that if you have a 5.5 cm aneurysm, you have a 5% risk for rupture at 1 year, and that in 5 years it would be 25%. Our study showed the rupture risk at 1 year for an aneurysm that size is actually only 1.3% and that there isn’t a huge increase in risk at 5 years.

Did you find differences between women and men?

Chang: We demonstrated that women have a different risk of abdominal aortic aneurysm rupture, but we don’t really know why. This is something we intend to continue to study.

Chang: We want to see if we can predict which patients with small aneurysms will go on to need surgery. The goal in treating aneurysms is to prevent rupture, but you also don’t want to do unnecessary surgery.

This article recently appeared in mykp.org