Ted O’Connell, MD, FAAFP, watched the new COVID-19 pandemic in early 2020 with a worry shared by the world. Hospitals were at risk of being overwhelmed with sick patients, and the crisis was compounded by a sudden and unprecedented demand for medical supplies.

But as the chief of the Department of Family and Community Medicine at Kaiser Permanente Vallejo, Dr. O’Connell was in an excellent position to take action.

How quickly and well he did resulted in his recent President’s Volunteer Service Award from the White House and AmeriCorps.

From idea to prototype

During the first month of the pandemic, Dr. O’Connell independently launched a podcast to bring accurate, breaking information to the public, with guests ranging from physicians at universities across the U.S., to leaders in medicine.

“An old colleague heard the podcast and said I needed to connect with a group that was thinking about the pandemic on a societal level,” Dr. O’Connell said.

Joining up, Dr. Connell said the group researched just how bad the pandemic could get — and what could help the most. “Early on we spoke with New York City physicians who were experiencing the crisis at ground zero so we could get their views on critical issues.”

The concentrator draws in atmospheric air through a filter and passes it through an oil-free compressor. The pressurized air is cooled using a copper coil heat exchanger and then passed through sieve beds containing a mineral called Zeolite that absorbs nitrogen from the air at high pressures, thus sequentially increasing the concentration of oxygen. As each sieve depressurizes, nitrogen is released. The oxygen-rich air is stored in a reservoir, and a flow meter is used to provide continuous and measured release of oxygen. 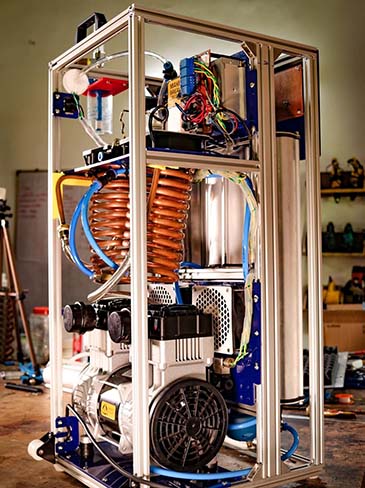 Prototype of the Oxygen Concentrator

Prototype of the oxygen concentrator

Soon they understood that lack of access to oxygen could become significant if hospital beds were full, particularly since patients with COVID-19 can develop very low oxygen levels and one of the mainstays of treatment is oxygen therapy.

But in a worst-case scenario, a do-it-yourself, high-flow oxygen concentrator assembled from inexpensive and readily available materials could potentially save lives.

Dr. O’Connell, Maher Daoudi, a social entrepreneur, Ed Mousselli, an engineer, and Robert Byrd, a builder, set to work. Utilizing Dr. O’Connell’s input regarding human physiology and real-world clinical scenarios, Mouselli designed their concentrator in 2 weeks. One week later, he had a prototype.

The group’s prototype ran for a week in a hot, humid garage in Houston, to ensure it would produce the oxygen flow and not burn out.

Tata Engineering validated the device and its ability to generate 92% oxygen at a flow rate of 20 liters per minute — essential for the high oxygen requirements of many COVID-19 patients.

Next, the group got their work out to the public at lightning speed via websites and social networks.

They provided all of the diagrams and instructions open source, or free.

“Groups worldwide are continuing to modify it,” Dr. O’Connell said. “The extreme humidity in India created issues, so engineers there are resolving that. Dozens, if not hundreds, of people are actively building and distributing the concentrator. A group of high-schoolers led by Colin Pope even raised funds to build one and record the process. Now they’re applying to college engineering programs.”

Dr. O’Connell emphasized that the concentrator is not a medical device, but was created “as a last-ditch effort to save human lives in the worst case scenario of the disease.”

“We were thinking globally early on,” Dr. O’Connell added. “Developing nations have experienced these disaster scenarios. In many cases they don’t have oxygen pumped in through the walls like in our hospitals. At points during the pandemic, they have been running out of oxygen before they can get new shipments of tanks.”

“My hope is that as the design continues to be tweaked and modified it may become a more consistent resource of oxygen in resource-depleted countries,” he said. “We’re already hearing that others are building linked, multiple concentrators in order to produce oxygen on a larger scale.”

Dr. O’Connell is thankful for his recent White House award.

But it was in those first, terrifying days of COVID-19 that he found his true reward: a sense of purpose that led to a life-saving invention. “I had a feeling I needed to do whatever I could to have a positive impact during the disaster.”

This story originally appeared in MyKP.kp.org